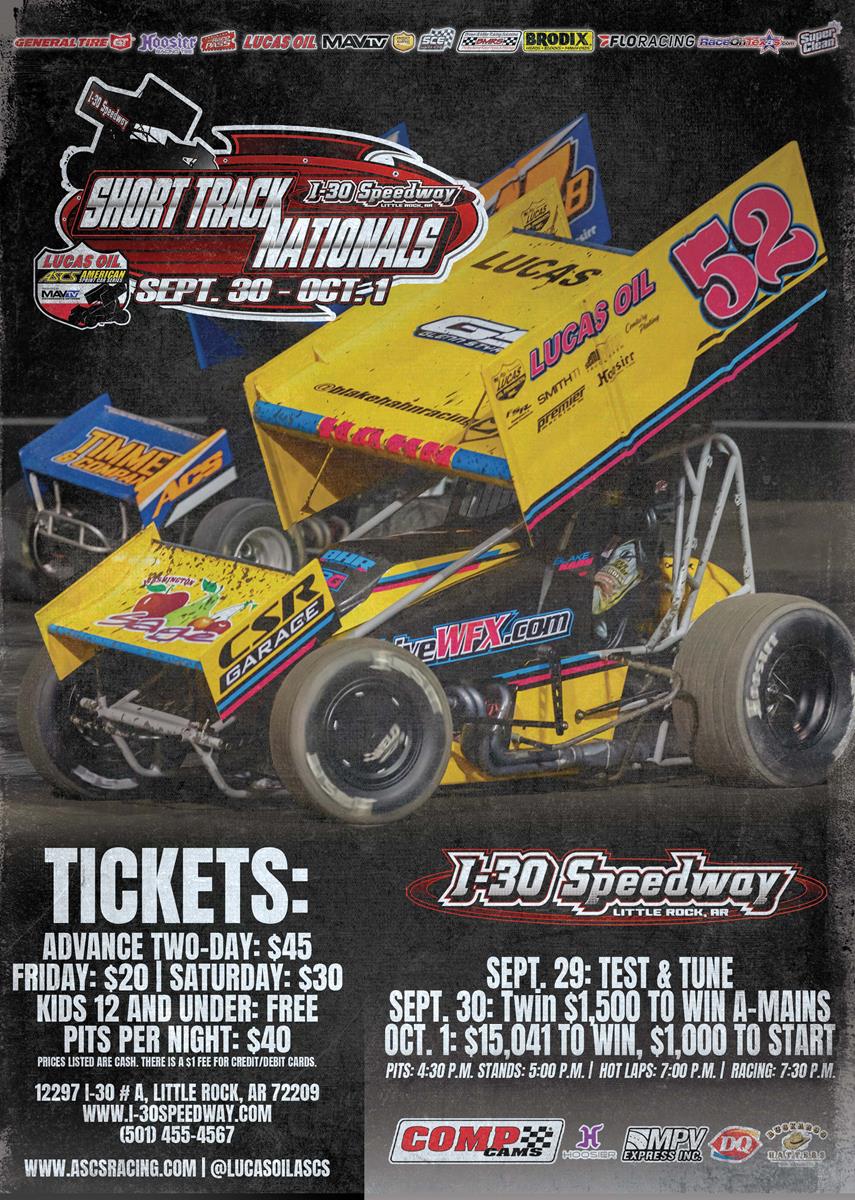 Lonnie Wheatley, LITTLE ROCK, Ark. (August 25, 2022) – For the past 34 years, the pilgrimage to Little Rock’s I-30 Speedway for the nation’s top Sprint Car teams as well as fans is a well-entrenched tradition.

And there will be more bounty on the line for those competing at the 35th Annual COMP Cams Short Track Nationals presented by Hoosier Tires that takes place on September 29 through October 1 at the Lucas Oil ASCS National Tour sanctioned event.

Courtesy of MPV, the Saturday night STN championship finale winner’s share has been boosted to $15,041. Additionally, Buckaroo Hatters and Mike Moore have bumped up the back portion of the STN finale purse with a minimum of $1,000 to make the cut.

The 35th Annual COMP Cams Short Track Nationals presented by Hoosier Tires kicks off with a Test ‘N Tune on Thursday, September 29 from 6:00 p.m. to 9:30 p.m.

The racing action kicks into high gear with Friday’s preliminary action that culminates with a pair of $1,500-to-win feature events that lock in the first two finishers and sets the stage for Saturday’s finale that includes a full set of heat races that adds points to Friday’s totals to set STN finale feature lineups.

Pre-entries submitted by Tuesday, September 27, are $100 and include a free two-day driver pit pass. Entries after September 26 are $100 with no pit pass included.

The entry form is available at https://www.i-30speedway.com/downloads/get.aspx?i=760397.

Friday events points accumulated will be carried over to Saturday night, with another set of heats utilizing passing points added to the Friday total to set the championship feature lineups. The top two in combined points from Friday night and the Saturday heat races with join Friday’s four lock-ins in the Pack Building Materials “Dash for Cash”. The next eight in points will occupy STN championship feature positions 7-14 with the balance of the field in “B” and “C” Mains. Three will transfer from both “B” Mains to set the 20-car feature field. The 21st position is reserved for the I-30 Speedway track champion if necessary.

Children under 12 are admitted free on both nights, courtesy of Dairy Queen.